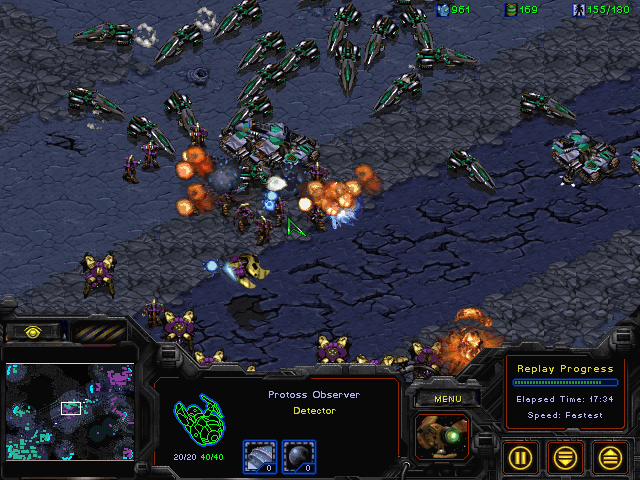 The following article lists all relevant build orders and strategies for Terran.

Terran is often described as the hardest race for beginners. This reputation is mainly based on the fact that Terran units die rather fast in the early stages of games against the other units, which in turns forces a Terran player to control the units with care. Furthermore, Terran strategies are often pictured as the passive part, partially because of the aforementioned unit characteristics. However, a well chosen strategy enables Terran to turn seemingly fragile units into a deadly army, while still being able to play as aggressive as any other race.

The Terran macro management is relatively similar to the Protoss base management. Both races can produce workers (SCVs and Probes respectively) and fighting units from different structures (Command Center and Nexus respectively) and additionally research upgrades in tech buildings or add-ons. In comparison to Zerg, the underlying logic is easier to understand. Terran in most cases does not need to make a decision whether or not SCVs should be produced. If not stated otherwise, a Terran will always constantly produce workers throughout the entire game. An overflow of workers on one Command Center will be transferred manually to a newly built expansion (Maynard Slide). However, in modern Terran match ups, especially against Protoss, Terran often works with so-called economy cuts. This means SCV production or Vespene Gas harvesting is temporarily stopped in order to train more units or raise a structure earlier than usual.

Building Placement often plays an important role for Terran as well, mainly in the earliest stages of a game. Due to the weakness of Marines against their pendants – Zealots and Zerglings – the first two Depots and a Barracks or a Bunker are placed in a way, that the ranged units can use them as physical obstacle they can hide behind. This principle is called wall-in or sim city. In later stages of a game several buildings are used in the same way to deny enemy melee units access to expansion spots. How and where wall-ins are possible are usually described in the map articles.